Beautiful, just beautiful (you see what I did there?) 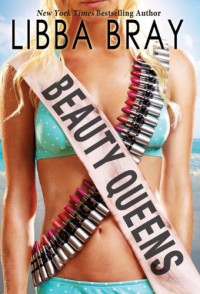 I don’t care what the cover says to you or what you think about Libba Bray or what you’ve heard about her or even this book.

This is the one book you cannot read a review of and form a good opinion on. You have to read it for yourself.

Beauty Queens is hilarious and downright ridiculous at times but is balanced out by the realistic portrayal of young women and society’s expectations.

This is the second book I have read by Libba Bray. The first one was A Great and Terrible Beauty. And while not the worst thing I’ve ever read, not exactly the best experience I’ve had.

So I am quite pleased to say that even if you wanted to smack the Gemma books (or worse) you will love Beauty Queens.

Beauty Queens has several strengths and improvements.  Bray had improved as a writer drastically, and the diverse cast provides insight and comedic relief that the Gemma Doyle series lacked.

The addition of unlikely and downright ridiculous helps to keep things from getting depressing.  One of my favorite scenes was the one where Petra has to pee on the pirate and Sinjin is all “ohhhh”.

While on the subject of the pirates, I liked that not everyone got a happy ending in the romance department. The twist with Duff surprised me, but it was different from what you’d expect. The betrayal and the aftermath (Duff trying to win Adina back) just made me want to kill the guy. Regarding their relationship, I’m glad that Adina made Duff use a condom. There are so many scenes in YA where the characters do it and there is no mention of condoms so the acknowledgement of condom’s existence pleased me (don’t ask why).

I liked that no matter what; Adina refused to take him back. Another common occurrence in YA-or any novel featuring romance really-is a jerk love interest who is portrayed as a good guy. So that was another win for Beauty Queens.

The climax was a little jumbled but not so much that I had to reread things. It was mostly the switching of POVs each chapter.

When the girls confronted Ladybird Hope on Barry Rex Live I noticed that they said sorry once or twice which irked me because they had agreed to stop saying sorry unnecessarily.

I loved the epilogue. It was so uplifting. Only quibble was that Shanti’s parents found her husband but it said that he was awesome so if she’s ok with it it’s all good.